April Updates and Releases - No Fooling!

We've wrapped up the series of World of Morden ebooks created through our January Kickstarter, and we wanted to make sure that everyone was aware of the new products. 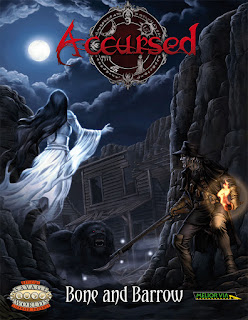 We've previously talked about our releases of Frost and Fang as well as Science and Sea. Bone and Barrow is the final ebook in that series. Cairn Kainen and the Outlands were the first casualties of the Bane War. Neither could mount an effective defense against the Witch Armies, though for very different reasons. In both cases, their early collapses provided the Witches with the resources they needed to push the battle into Morden's other surviving nations.


Now, both regions suffer under tyranny, long after the Witch Council dissolved. Hecate's Oubliette remains in the foothills of the Darkwall Peaks, and her banes prowl the Outlands. The Morrigan has made a new home in Blackroot Wode and collects a steady tithe of new souls to feed her cauldron.


Bone and Barrow provides additional information about the nation of Cairn Kainen and the Outlands that provide a barrier between the Darkwall Peaks and Morden's more stable nations.  It includes a broad range of different adventure hooks for GMs and players looking to explore these specific regions. It also introduces new banes as well as Hindrances and Edges specific to these cultures.


Bone and Barrow is available for $6 from DriveThruRPG.
An important note on this release is that Sean Tait Bircher was so excited about his work on this that he wrote more than would fit. He's chosen to make his extra writing freely available on his blog.

With the last of the ebooks complete, we can now also offer the print compilation of all four volumes. Accursed: World of Morden compiles the PDF releases from Sand and Stone, Frost and Fang, Science and Sea, and Bone and Barrow.  It's now available in several different print formats directly through DriveThruRPG, starting at$35.

In the World of Morden, the forces of evil triumphed. The six great nations lost the Bane War to the Witch Council. Their armies were shattered. Now, Witches rule the land, but their Grand Coven has been sundered. The remnants of their massive army include captured citizens of the conquered nations who fought as the Witches’ shock troops. These soldiers became Accursed. Witchmarks burned into their flesh and souls transformed men and women into monstrous forms. Unable to return to their former lives, the Accursed wander the land, giving aid to those in need in an attempt to atone for past sins.

As part of the World of Morden project, we created two new maps for Accursed: Sand and Stone. This required us to do a new layout of the ebook. When we did that, we ended up with a little extra space in the Hebron chapter, which we used to add another bane from the Crone's witchline: the Many Header. Previous buyers can download the new version from their DriveThruRPG library. Other interested customers can obtain Sand andStone for $6 from DriveThruRPG.

We needed to add Ill Omens as a print product to DriveThruRPG in order to fulfill it to customers in our January Kickstarter. We've chosen to leave it available for purchase their as well for customers unable to obtain it through traditional channels. Ill Omens released in the summer of 2014, as a compilation of all of the adventures that we had released in PDF up until that time. It's now available for $20 on DriveThruRPG.

Melior Via is participating in a charity bundle organized by Fainting Goat Games. The bundle includes more than $200 worth of RPG ebooks in exchange for a donation of $20. All proceeds go to the Paws and Stripes charity. They're an organization devoted to training and providing service dogs to veterans in need of assistance.
Here's the direct link to the bundle: Paws and Stripes Bundle on RPGNow.

Ross continues to work on a novella for release in late 2016 that was funded by the January Kickstarter. We also have two short adventures that are in development in conjunction with a couple of our Kickstarter backers, which we expect to release this summer.
Posted by John Dunn at 7:38 AM