This week, we managed to squeeze out another small release for the M&M version of the Hope Preparatory School Setting. This is the Artists Character Pack, now available from DriveThruRPG for $2.99. It features the artwork of Dan Houser. 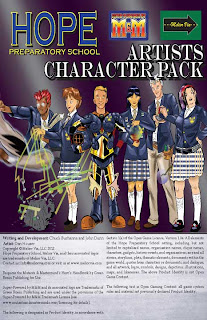 Members of the Artists Clique aren't necessarily focused on becoming traditional crime fighting vigilantes. Instead, these metahumans often want to do more with their abilities. Some, believe they may be able to serve humanity as scientists, politicians, or philosophers. Others pursue dreams of a career as a professional athlete or a performer.

The character pack includes two Sophomores (PL8), two Juniors (PL9), and two Seniors (PL10), each from that clique. All are fully statted for use as PCs or NPCs in a M&M3 campaign. In adventures run at HPS, they might serve as friends or foils. In a more traditional setting, the characters could easily be friends, supporters, or even interns.

The ICONS version of the character pack is next up in the queue, and shouldn't be too far off.