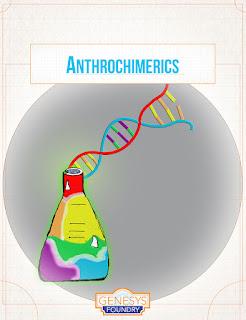 It's no secret that John has done quite a bit of work for Fantasy Flight Games over the years. Much of that has been for the Star Wars RPG line. A couple of years ago, FFG decided to make a universal version of that game system, which became Genesys. Just last night, they held their annual Flight Report at Gen Con 2019. During that event, they announced a Community Content site on DriveThruRPG, where authors can upload content. That site is called Genesys Foundry.

As part of the build up to that announcement, FFG asked a group of the veteran freelancers to create some materials to preload into their upcoming site. After a bit of thought, I wrote up Anthrochimerics.

This release presents twelve new species for use as player characters (or NPCs, I suppose) in any setting. Each of the species is based on combinations of human and animalistic traits. In addition to a basic stat block for the new species, it also includes suggestions for how those species might establish a culture, including ideas for magical traditions and worldviews. Additional material suggests how game settings might include these species in Fantasy, Science Fiction, and Modern genres. Finally, the PDF introduces Species Talents, which are only available to members of specific species.

The species in this volume are:
Anthrochimerics is now available from DriveThruRPG for $2.95.

I'd really like to do a second volume of this, so I'm hoping this meets with some early success to justify more! (Oh - that cover? That's my daughter's artwork. She was pretty excited to show off her talents.)